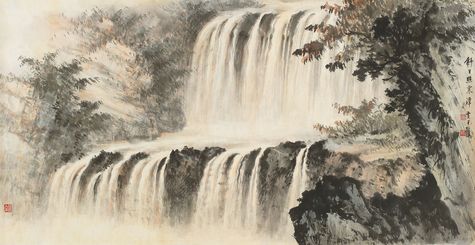 Among a surge of artists relocating to Taiwan after 1949, Huang Chun-Pi, Zhang Da-Qian and Pu Hsin-Yu were regarded as the three greatest artist. Huang Chun-Pi's unique depiction of clouds, mists and waterfall created majestic scenes which are both realistic and poetic, making him an important artist of the period. Despite a profound experience in imitating ancient works, Huang Chun-Pi was also inspired through observation. His love for Nature is prominent. From the age of 39, he travelled for live drawings. Luofu, Guilin, Hengshan, Taishan, Huashan, Huangshan and Emei were among the sites he visited. During the war, he visited Sichuan, Sanxia, Jialing, Emei, Qingcheng, Jiange, and observed the majestic view. Upon his arrival in Taiwan, Huang Chun-Pi often visited Alishan to observe the mists and their changes throughout the day. He would record them with ink and brush. His advancement in waterfall paintings could be traced back to 1969 when he was invited to Africa and the US. There he visited the three greatest waterfalls in the world, namely the Victoria Falls in South Africa, the Iguazu Falls and the Niagara Falls. After decades of experience and devotion to life drawings, Huang Chun-Pi managed to create a unique depiction of waterfalls and listed twelve ways of depiction. His waterfalls are majestic as horses galloping on the paper and unique to Chinese paintings.

This work is one of the masterpieces of Huang Chun-Pi. One point perspective was used throughout the elongated structure, from the cliff and trees on the right, expanding at an angle extending to the left. Over 2/3 of the painting was dedicated to the waterfall, enhancing its majestic quality. The lower part of the waterfall was left empty to juxtapose with the lightly coloured mists generated by the waterfall. To capture the elusiveness of light over the rocks at dusk, the artist used a saturated broad brush to sketch the cliff on the left. This swift brushwork created intersecting lines enhancing the movement of the painting. Every stroke was meticulously planned by the artist to record this majestic view of the waterfall at dusk and the shimmering light reflected from the rocks.
Related Info