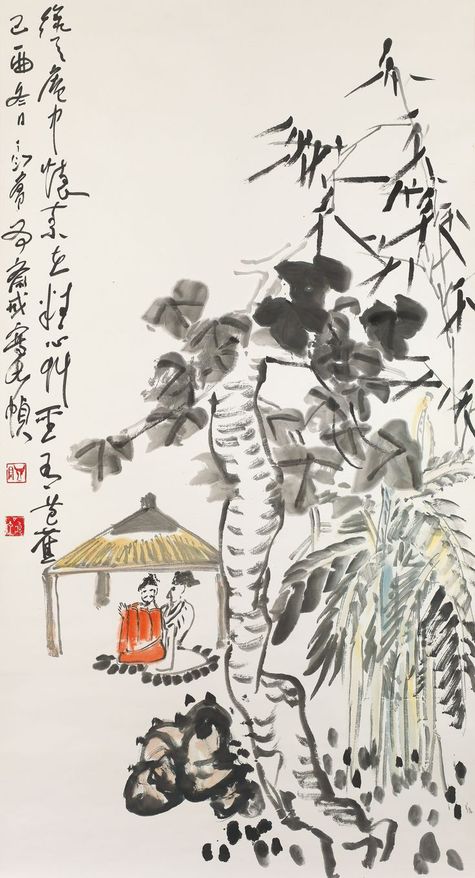 PROVENANCE
Acquired directly from the artist

This work is derived from the story of Huaisu, a monk and poet of the Tang dynasty. A Song classic described his home and surroundings of the poet who uses banana leaves as paper and books, thus described as living under a green sky. In this work, Ding Yan-yong wrote in cursive script, adapted from Huaisu, while his use of ink could be referred to Xu Wei and Zhu Da. Hence, he merged the free-hand form of painting with cursive script. Intersecting strokes and light colours suggest firmness and weight, contrasting with the swift dry strokes above. Wet dense ink of the leaves suggests classical painting technique. On the right, banana trees were outlined in thin strokes creating a rugged surface, then coloured in green and ochre. This natural depiction suggests tranquillity. An unconventional way of depicting bamboo on the top shows Ding's sophisticated use of brush. Wavy lines and intersecting dots of ink suggest a delicate use of brush and a bold character of the artist. The hut at the back was supported by three columns and a triangular roof. Two scholars were seated opposite to each other having a delightful chat. Cursive script of the poem is vibrant, while describing the story of the poet. This shows the artist's admiration towards the poet. This six-feet giant composition uses a simplistic composition and cursive strokes to create an atmosphere echoing with classical techniques, while contrasting with the vibrant subject, making this a unique painting.
Related Info