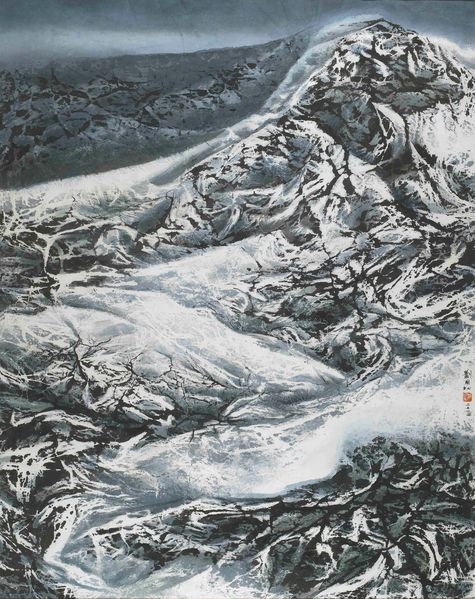 Ink and color on paper

Liu Kuo-Sung founded the Fifth Moon Group in 1956, widely publicising a call to 'overturn the centre tip' in modern ink painting theory, which became the focus of a heated debate in the art world. Liu promoted the incorporation of Western concepts as the aesthetic foundations for ink painting, and he used abstraction as a means to escape the visual experiences of the past. He transcended nature's representations by depicting free-spirited beauty, thereby making his subject eternal. Commenting on Liu Kuo-Sung’s work, writer Yu Kwang-chung once wrote, His paintings have their own orbit, so full of vitality to have taken on their own endlessly vicious, unbearable life of a sort that goes on and on with neither beginning nor end, and it constantly draws us in.

The piece “Langkazi Snow Shoulder” is one of Liu Kuo-Sung’s later works, depicting a stroll through vast, smoky waters, gazing at a world without bounds. It exemplifies Liu Kuo-Sung’s purified approach to the natural landscape, each external feature simplified into geometric shapes, and his method of emboldened texturing gives the scene a beautiful, skin-like appearance. An ‘Eastern consciousness’ is embodied in Liu Kuo-Sung’s artwork, and a deep understanding of life is vividly portrayed through his use of the brush. Abstraction is used as a means to escape the visual experiences of the past. And through his depictions of a freespirited beauty, representations of nature are transcended and made eternal. Liu Kuo-Sung’s innovative ‘Ripping the Tendons and Peeling the Skin’ technique enriches the context of the painting and turns the world of landscapes into a part of the self. Exemplary of the artist’s truly unique approach, the technique displayed in this work has also become widely known as the ‘Liu Kuo-Sung Style’ of abstract landscape painting.
Related Info