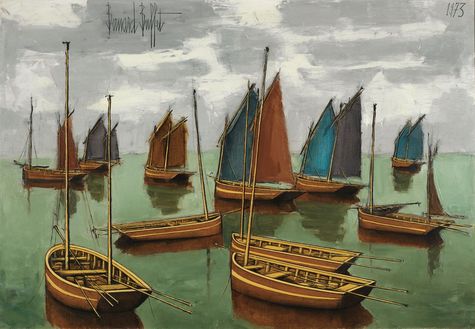 This lot is recorded in the Maurice Garnier Archives
under No. AE.67

Born in Paris in 1928,grew up on the coast of Brittany, Bernard Buffet loves biology. Though he encountered difficulties while pursuing academic, along with his delicacy and sensitivity, cannot stop others from discovering his outstanding artistic talent. The 1948 painting“Le Buveur”was exhibited in Galerie Drouant- David, and later became the collection of Musée d’Art Moderne de la Ville de Paris. In the same year, the artist met his dealers of a lifetime, David and Maurice Garnier, hence signed the agency contract, even awarded with “Prix de la Critique”, from then on got famous almost overnight. In 1955 while Buffet was only 27 years old, he was named as the best out of the top ten post war artists by“Connaissance des Arts”. When his first retrospective exhibition was held in 1958, he was even highly praised by the media as“the successor of French realism painting.”A shy and jerky young man has since then transformed into a talented artist mostly sought after by the limelight.

Buffet applied black outlines in his paintings, which comes with strong personal style, have always been touching. Many artists, including Taiwan predecessor painter Shiy Dejinn, have been profoundly influenced by him. Japanese collectors even accredited him as the paramount religion of French art and built an art museum for him. Most of his creations are in series, with repeated subjects, characters, imagery and themes. After breaking up with Bergé in 1958, Buffet went to Saint Tropez, South France for a holiday, and met Annabel Schwob, a model and writer and get married soon after. In the early 1970s, Buffet decided to move away from the hustle and bustle with his wife Annabel. During this uncontested period, he was then able to relieve the pressure and return to the nature, devoting himself to concentrate on creating a series with themes such as ports and ships. This autumn presents“Bateaux au Mouillage”, which is his classic port theme in the 70s, showing his love for nature and an enlightened state of mind.

“He painted French ports full of sailboats and ships, the paintings are very detailed, leaving behind meticulously crafted canvas one after another. In his castle, there is a spacious library that can accommodate a huge yacht model, which is so symbolic to the great nautical era, the towering mast is even taller than Buffet himself. He

himself later recalled “There has never been a happier time than painting the “Ship” series.” “─ Nick Foulkes on Bernard Buffet: The Invention of the Modern Mega- Artist “Bateaux au Mouillage”undoubtedly forms part of an important series of his works depicting port cities and ships in the early 1970s. The surface of sea while as flat as the mirror, reflecting the static boats. The cross- coloring technique applied between the bluish- green sea water and the inverted image of boats, leading the viewers to come into the bay. The boats seem to be swaying from side to side under the breeze, the sides of the boats and the waves stir up splashes and ripples. The artist cleverly manipulated the layout in order to crave out the composition, along with repeated seascape, making the perspective of the viewers both vivid and active. The cloud-covered sky seems to harbinger an upcoming storm, the sailboats swayed slightly on the sea level, showing the artist’s joy and his surging mood.

In the eyes of everyone, Buffet’s life is undoubtedly rich and wonderful. He was born in the era with the rise of abstraction but devoted himself to creating figurative art, he was destined to face various obstacles. At that time, the art world generally regarded Picasso’s abstract art as the future of French art, while Buffet’s figurative art was a retrospect of the past art world. Buffet entered the art world as a bright and promising new star, his fame is fiercely hot for a while, yet later was relegated as symbol of the middle class’s excessive commercialization of the past. These experiences have therefore created his dramatic life story. At the age of 15, he entered the renowned National School of the Fine Arts (École Nationale Supérieure des Beaux-Arts) and trained as an intern in the studio of the painter Eugène Narbonne when he was still studying. He once joined the anti- abstract art group L’homme Témoin (the Witness-Man), when abstraction began to dominate the art circle, he strongly supported the art of expressionism. His creation throughout his artistic career is astonishing, with more than 8,000 works. In recent years, his works have again been the centre of attention. This season“Bateaux au Mouillage”is even more rare and commendable, considering the essence of his painting style and the ingenuity of the subject matter, this work is definitely the crown jewel that collectors should not miss.
Related Info